The Alpha Spectra logo has been retained from our days as a Radon Laboratory when identification of charged alpha particles was of prime importance.

Since then we have expanded our facilities and capabilities and now produce standard and customized instruments for all kinds of radiation detection whether that be charged or neutral particles or massless gamma rays.

To that end our logo continues to serve us well, schematically indicating nuclear particle decays into different daughter products and their means of detection. 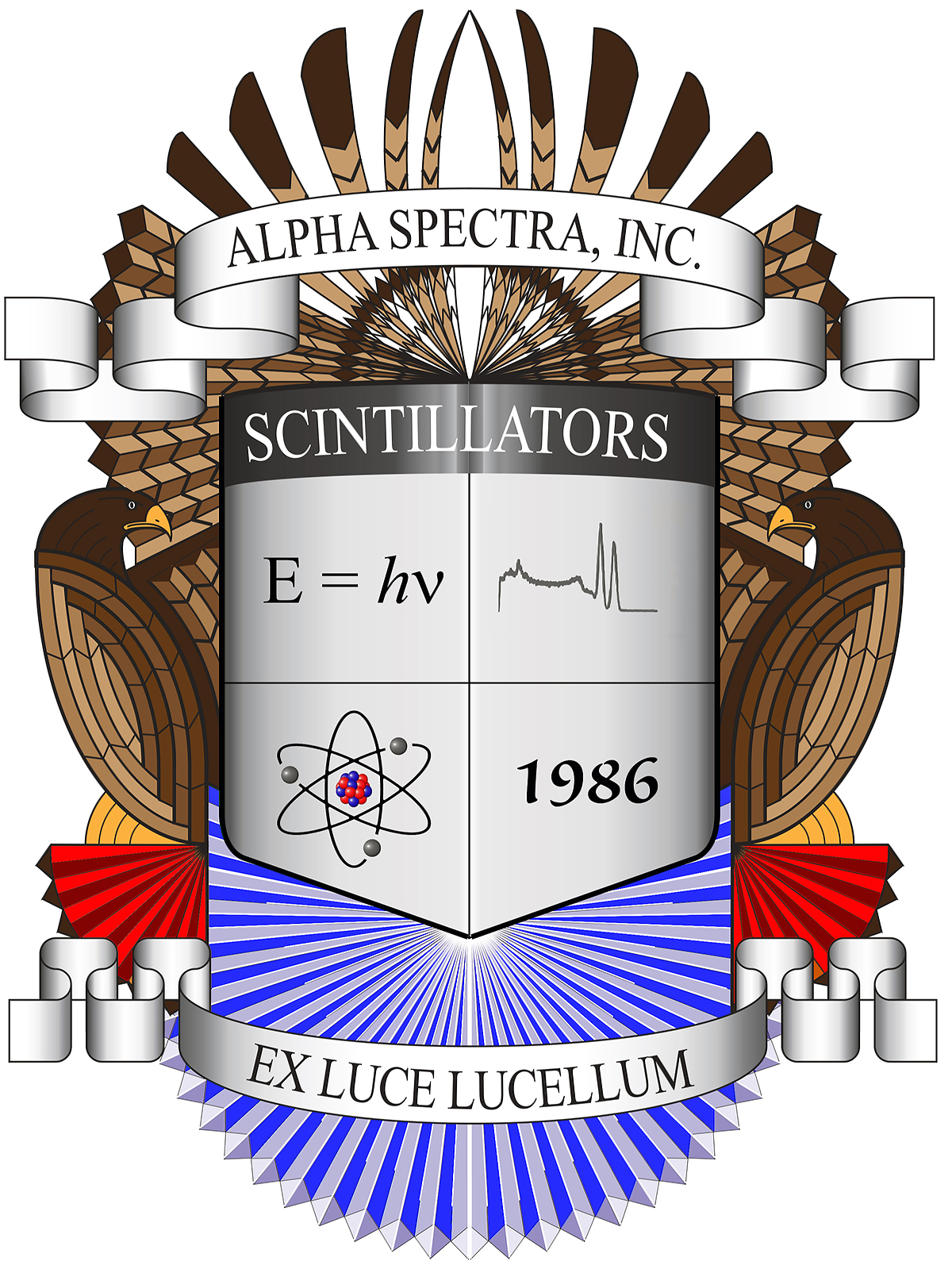 We had some fun developing the Alpha Spectra Coat of Arms. There are a few background stories that go with the artwork. The prominent inward-looking pair of raptors and supporters of the shield are Red Tailed Hawks. These birds of prey are a common sight in our home state of Colorado. The Red Tail Hawk has keen eyesight and is swift in flight. The top mantle shows individual feathers of the hawk and they are shown fanned out ready to take flight. These feathers support the upper banner featuring our company name. From the bottom of the shield are beams of light emanating in the same wavelengths of light that are given off by a scintillator when an event occurs inside the crystal.

In 1905 Einstein hypothesized the quantization of energy was a fundamental property of light emission. His idea provided the explanation for the photoelectric effect. We all know the importance of this effect to gamma spectroscopy. It was Max Plank who studied light being emitted by a light bulb when he proposed that the energy given off was by the light was inversely proportional to the wavelength of the light. He confirmed the Energy-wavelength relationship with experimental data. This relationship was the first step toward understanding the quantization of light. This is an incredibly simple relationship and it is shown here.

The upper right hand quadrant shows a 60Co spectrum with its two full energy peaks at 1.17 MeV and 1.33 MeV. When scintillators were first developed in the 1950’s, the monoenergetic source 137Cs was used for determining the quality of the material for spectroscopy. It wasn’t unusual to report results of around 8.5% at 662 keV for a good piece of NaI(Tl) material. Some of the poor result can be attributed to the quality of PMTs available at the time. A lesser known fact is that the 60Co spectrum was also used to quantify the quality of the scintillator by quoting the peak-to-valley ratio for the spectrum. The higher the ratio the better the ability to separate two peaks in a gamma ray spectrum.

The lower left quadrant is the popular atomic symbol.

Finally, the lower right hand corner shows the year that ASI was founded – 1986. ….and we’re still going strong! Humbly, ASI has become part of the history of scintillators as we have contributed to the successful use of our scintillators in laboratories and applications around the world for many years.

The Latin phrase “Ex Luce Lucellum” in the bottom banner is attributed to the Englishman Robert Lowe. The phrase represents a cleaver play on words:

Out of light a little profit,

Profit from a little light.

How appropriate for us at ASI who are indeed operating a business for profit depending on such a small amount of light!

Many thanks go out to Richard Grimm, a young artist for his insight and creative skills that helped make this artwork possible.